One of our tray or box former erecting solutions is the roll tuck. It is engineered to take a blank tray, one at a time, from the hopper, and pull it through forming plows. It will then erect the side and end panels of the tray while folding in the minor flaps. The moment the tray reaches the bottom of the vertical travel, the roll-over flap is folded. It is locked in place by a set of pneumatically controlled bars. After which, the finished tray will be seen ejecting from the PopLok packaging machine.

Another machine is the Vassoyo that will take one blank tray at a time. The tray will be later on pulled down with the vacuum cups from the hopper. Next, the blank will be fed under the glue guns while the minor flaps of the tray will be glued down. The blank will then travel under the ram mandrel. There, it will be forced down through the corner folders, forming the tray. Afterwards, the tray will be confined in a compression area. It will stay there until the next tray is ready for another forming. It will then be dropped onto a discharge conveyor. This will serve as its transportation to exit the machine.

The third and last box former is another model of Vassoyo series, the VassoyoAir where a blank tray is pulled from the top of the blank hopper. Under the forming section, all its flaps will be applied with a glue. The blank should then be positioned under the ram and mandrel assembly. Once positioned properly and tucked in place, the ram fires and forces the blank down through the forming section of the machine, and this is when the minor flaps on the tray are folded in, which will then form the body of the tray.

The tray is then detained in the forming section to give time for the glue to set on the minor flaps. The process will continue by rolling the ledge flaps over the ends of the tray. The side wings will be folded down and later on, compressed against the retractable mandrel. It will end with the mandrel withdraw to give way for the ram to move up and let the finished tray exit. The finished tray will be discharged once the next tray enters the forming section. 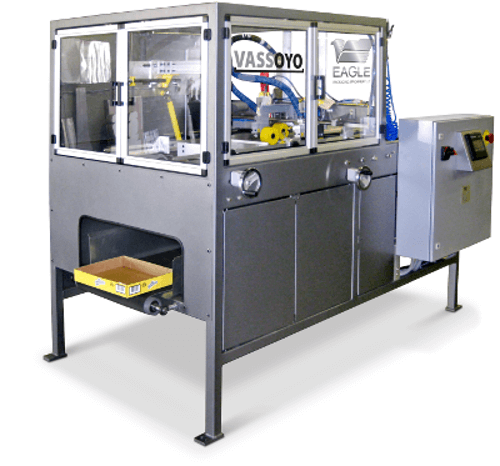