Eagle offers a large selection of automatic case erector machines that are engineered to last the toughest of environments and these case erectors are the following:

Our Boxxer T-series is designed to not just erect case but also tape them with speed of up to 50 cases per minute. This easy-to-operate case erector is designed to load HSC or RSC style knockdown blanks, pull them from the hopper, fold the minor flaps and positively erect cases, seal the bottom part, and finally, discharge them from the machine. The Boxxer T-series comes with user features like color touchscreen, easy load blank magazine, and high capacity tape head. Additionally, it also offers great service to its users by having interlocked doors, Nema 4 enclosures, and pneumatic components. This family of automatic case erector with tape consists of 3 models:

Next is the Boxxer Auto-Lock that is commonly used for case erecting applications that do not require tape or glue, as opposed to the Boxxer T-series. It is designed to load knockdown blank, erect them individually, fold. And lock the major and minor flaps, then lastly, discharge the finished cases in a neat way. This care erector can form cases independently or it can be integrated into a full packaging line. Its standard features include quick changeover, welded steel frame, interlocked doors, Venturi vacuum technology, Omron PLC, and a color touchscreen.

Third is the Boxxer 2200 that will load knocked-down RSC or HSC blanks into the hopper, erect them squarely, apply hot melt glue to the minor flaps while major flaps are being plowed down, set the glue by compressing the flaps, then finally, discharge the finished case from the machine. Its standard features are mechanical chain drive, a color touchscreen, interlocked doors, easy load blank magazine and Nordson glue system.

Lastly, we have the Boxxer 4000 is designed to load HSC or RSC blanks into the hopper then erect them one by one. Once erected, glue will be applied to the minor flaps, and after which, the major flaps will be then compressed. The case will be sealed and then discharged from the machine. Its standard features include mechanical chain drive, a color touchscreen, interlocked doors, easy load blank magazine and Nordson glue system. 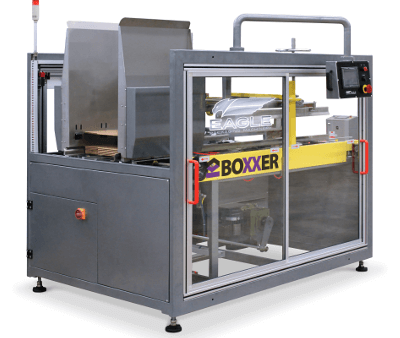